What to Do After a Death

Although there are many things to consider after the death of a beloved member of family or friend, the following information details some of the more specific areas for consideration.

Should you feel you need any further clarification, assistance in any aspect of the funeral arrangements or indeed answers to any general questions you may have just give us a call and we’ll help in every way that we can.

The first thing you must do when you think someone has died at home is to contact the medical services - either ambulance service or the deceased's GP. They will confirm the death and make sure the appropriate Death Certification will be drawn up.

If the person has died in hospital, the medical staff will certify the death and tell you where and when to collect the Medical Certificate of Cause of Death. Ring the Registrar office for an appointment to register the death, the local number is: Newcastle 0191 2787878

Please contact W.S. Taylor & Sons Funeral Directors as soon as possible. We will help to guide you through this process. 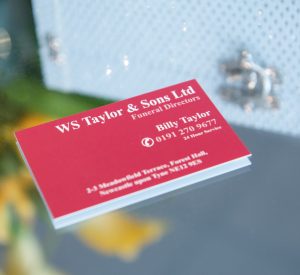 Find out about registering a death

Who Can Register The Death?

How Do I Register The Death?

The death must be registered in the Registry Office for the district where the death happened. Our Funeral Director will advise you on which office you should go to.

What Documents Do I Need To Take To The Registrar?

The Registrar Will Then Give You:

These are currently £4.00 each and you can purchase as many as you need.

When Can I Arrange the Funeral?

There are lots of things that will need to be sorted out before the funeral can be held.

Call W.S. Taylor & Sons Funeral Directors as soon as you are able. There is no need to wait until after you have registered the death. We can start to discuss arrangements with you to find out the style of funeral you want and liaise with all the people who help the funeral take place.

At this point we will be able to give you some options for the date of the funeral.

What Happens If The Death Is Referred To The Coroner?

Why The Coroner Is Involved - There are certain situations where the coroner needs to be informed.

Once reported, the Coroner's Officer or a police officer will usually take a statement from the next of kin or close relative and you may need to identify the deceased.  The facts will then be presented to the Coroner who will decide if a post mortem needs to be carried out.

Proceeding With The Funeral

We will liaise with the Coroner's Officer and keep you informed. Normally, the forms that we require for the funeral to take place will be issued by the coroner and either delivered to the crematorium or must be collected from the Registrar.

You will need to register the death at some stage to obtain certified copies of the Death Certificate for insurance companies, banks, building societies and solicitors. These are currently £4.00 each and you can purchase as many as you need.

If an inquest is to take place, you cannot register the death until the full inquest is over, but you can obtain an interim certificate from the Coroner to sort out financial matters.

We serve families throughout the North East of England, please contact us to discuss how we may be of assistance.